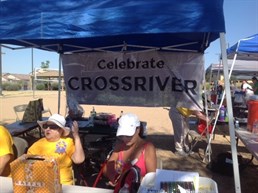 With the amazing assistance from the Cross River Board of Directors and the 10th Anniversary Event Committee, we were able to put on an incredible event in celebration of the community’s 10th anniversary! The event was held on Saturday, October 22nd and we had an astounding 1,000 residents in attendance!

To add to the festivities, there were roughly 70 donated raffle prizes, plus a multitude of door prizes.  Everything from autographed football memorabilia to gift bags to jewelry to carpet cleaning (and everything in between!). One of Cross River’s Committee Members even dressed up as a scarecrow and handed out gift cards and bags of personalized M&Ms to commemorate the event.

There were also various non-profit organizations in attendance that helped sponsor the event. We would like to extend big thanks and appreciation to the North County Fire and Medical, who graciously handed out complimentary snow-cones and popcorn, Girl Scout Troop 1672, who served lemonade and ice tea and Promise Paws Rescue, who offered face painting. We also had AZ Barbeque cater a delicious lunch for the entire event.

The event was also featured a 10-team, double elimination corn hole tournament with the grand prize being a set of corn hole boards and all the related equipment. Additionally, there were multiple carnival-stand style games, a DJ and a steel-guitar player, who happens to be a Cross River resident.

The Maricopa County Sheriff’s Office also made an appearance and even sent the MASH Unit, a SWAT tactical vehicle, the boat that patrols Lake Pleasant and the MCSO helicopter, which landed in the community park. Firefighters hooked up to the hydrant and demonstrated to the kids how to use the hose and even let them experience the pressure for themselves. The demonstrations were greatly enjoyed and appreciated by all!

On behalf of everyone at AAM, we are so thrilled to have been a part of this monumental event for Cross River. Thank you to everyone that helped plan and to all the generous sponsors. Without the help of the wonderful Board of Directors, Committee Members, Cross River residents and sponsors, this event would have never been possible.

Our site uses cookies to make your browsing experience better. By using our site, you agree to our use of cookies. Learn More.